The road of the young adult from orphanages towards singing between the blocks and working by the day.

Calin Ioan, raised in orphanages, without a home, fights for a decent living. His palms show cracks due to heavy labour. He has started working when he was 14 since his family was not able to support him. He went to school and has discovered the talent that defines him and for which he is being praised. Born in Calarasi, Calin was raised in placement centres in Popricani and Targu-Frumos, Iasi county, since he was 2. Since he turned 18, he is living in the streets of Iasi – the city of seven hills. His parents were very poor and could not be next to him and the other six brothers, but our young man has studied at Trinitas School of Arts and Crafts in Targu-Frumos, where he graduated with a specialisation in construction work.

“My parents are very poor and they could not guide me in life, they manage as they can in a hut on the outskirts of Iasi, where they do not have light or running water. They live in poverty”, says Calin with a frail voice, bending his head into the ground. He, even if he can barely supports himself, has not forgotten his family. “They are hired by the day, collecting bottles to earn a few pennies and I help them with food every time I can.

Calin is a person with a soul full of sunshine. He has started working when he was 14, helping others with chores around the house. People are respecting him. When he was living in the orphanage in Targu Frumos, he was hired as a labourer by Lipovans. They hired him for picking plums and apples in the orchard, to stack the crates, to weed, to dig and to open the corn. It was heavy work, I was not used to it in the beginning, but I wanted to do something for myself, for the future. I was working mainly for food, and less for money.” 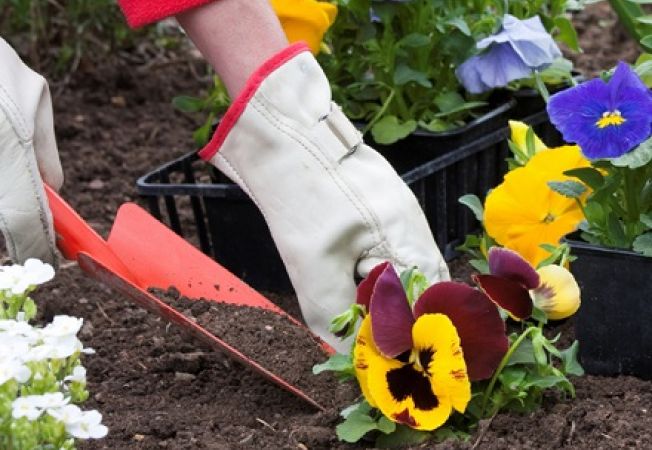 With a low voice, he tells how many torments he had to go through at the centre. “There was a difficult life at the centre. The educators were spitting on us, beating us with their fists and legs”. Although some people from the placement centres did not guide him nor helped him and they have treated him below dignity, Calin does not forget to show respect to those who have inspired him. He is talking about a person who has lightened his life: “There was one educator who was very helpful, Mr Petran Paveliuc, who teaches rock music at the Students Culture House. He has helped me to register for contests.”

When he turned 16, he participated in the creative camp at Strunga where he won the second place in music and the third place in painting. There, he felt appreciated and learned a lot. He participated in braiding activities and folk dancing.

“I am passionate about music, I love Ovidiu Komornik’s songs; he has a soft, warm voice. I know his songs by heart and I feel I identify myself with them. I wish I could meet him,” says Calin. Although he has never studied singing, he has won many music contests. 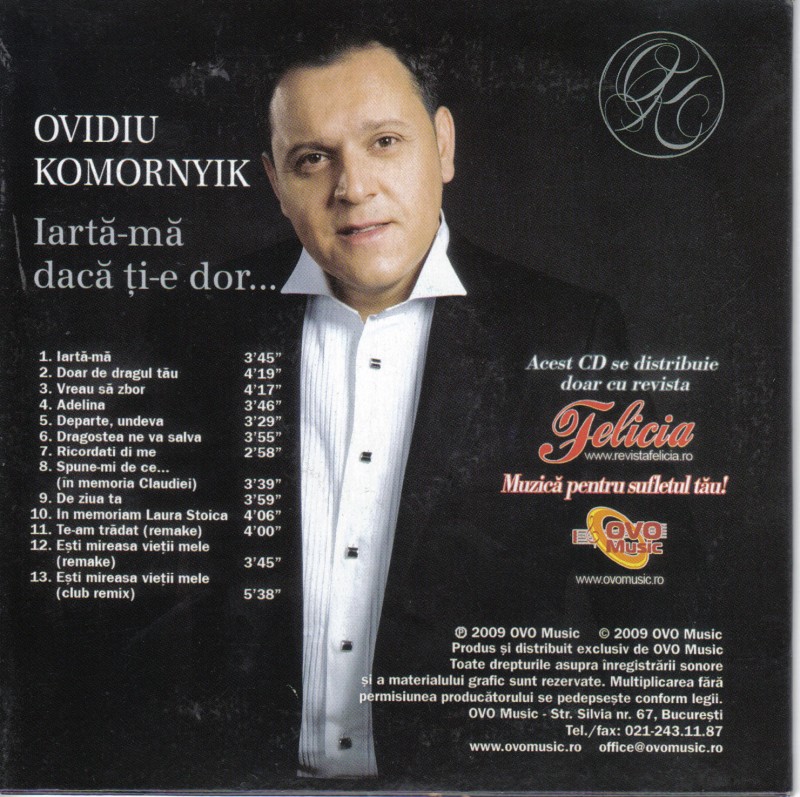 He got hold of music CDs with Komornik and he enjoys listening to him. The music is soothing for him and he feels that one day his dream will come true. “I wish to study singing, but it is expensive. Hopefully I can get help from a charity, to become member of a band”.

There are not that many people who have helped him, but there were a few who supported him growing up. Oprea Costel is one of the people who helped him. He is the president of Star Music Federation and he led him to participate at the National Festival of disadvantaged young people in Bacău.

“I have sung at the festival in 2008 and won the first place. I was very nervous, but it was an experience that marked my life. I left the stage quickly, I think I disappointed because I started crying and I said I wanted a job.” Those in the jury said that they do not offer jobs, but grades for the music performance.

With bright eyes, his voice gathers strength when he talks of his successes. He carries with him the diplomas who prove his effort and talent. He got the third mention at the Autumn Olympics Festival in September 2013, the award for excellence at Star Music Festival of Bacău in May 2014 and pop music award at Bacău in June 2014.

When he turned 18 he had to leave the orphanage and he ended up living in the streets of Iasi, trying to get by being a labourer.

“I sleep in the stair cases of blocks, in the streets. People swear at me sometimes, they make my life difficult. Sometimes, I sleep at my parents, but I cannot live there” says Calin. He is ambitious and has started to look for a job in order to improve his life. Many promised him what they could not deliver: “There are some sly bosses, who know how to fool people. One boss wanted to hire me in a bar, but after a while told me he does not need me anymore.”

The obstacles have not ceased to appear. Throughout the years, Calin had to put up with the people’s criticism who would condemn him for being Romani saying he was good for nothing. In Targu-Frumos he worked in a bar, where they exploited him: “I was cleaning ashtrays, tables, cleaning the place, but was not getting any money. They were shouting at me and were beating me with the chair.” 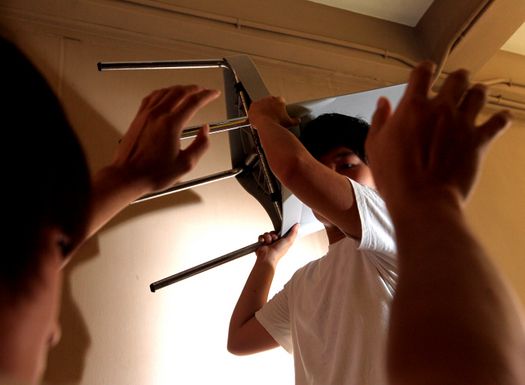 When nobody wanted to hire him, he would sooth his pain singing between the blocks in Iasi, for a piece of bread. He has scoured every neighbourhood and he ended being recognised, appreciated, but also humiliated and criticised Calin says: “I was leaving early in the morning, thinking that I might find someone to give me a job. I was singing, and I was happy. People would tell me to go to work why do I keep singing, and I would ask them for where to go to find a job.”

People of Iasi helped with whatever they could: food or a good word: “Many people would encourage me and tell me bravo. They would ask me to sing certain songs, they were watching me from the balcony, they would reward me for it, smile at me and I would thank them”, says Ioan full of enthusiasm.

He did not stop. He continued and he met people who were impressed with his desire. No matter how hard he tried he has not been able to find a permanent job. He worked in digging gardens or collecting rubbish from backyards. He ended up working in houses in different neighbourhoods in Iasi. “I worked in a house in Tatarasi, In Pacurari, wherever I was needed.” Calin says with regret that: “People need to trust you in order to offer you a job. They are afraid of hiring a stranger.”

He has a special voice and many people of Iasi have listen to him at least once. They know him as the boy who sings full of emotion songs by Ducu Berti, Ovidiu Komornik or Directia 5 between the blocks.

“I have confidence in myself, but I find it hard to believe that I will be a musician one day” whispers Calin. His talent made him known. He says he likes music. He likes wiping furniture, tiles and to help around the house, but people need to trust him.

He tried phoning newspaper ads, to enquire about possible jobs everywhere and he would be happy with any job, as long as he would be respected.

Recently, he got help from a man with a golden heart, who was impressed with his talent. He heard him singing next to his block and he called him to offer him a loudspeaker and a microphone. Calin says “I could not believe that I have a loudspeaker and a microphone. I was speechless.” Every time he finds someone who would let him to use the power supply, he loves giving a true performance for the passers-by in the street.

People were passing by and were seeing a clean and simple dressed up man, who had a loudspeaker connected to the corner kiosk. He was singing “Our story” by Directia 5 with his eyes closed feeling every sound that was rising up towards the windows were curious people were listening to. People would come out at the window and throw out little bags with money, saying: “Well done Calin”, “I haven’t heard you for a long time”. Some would watch from the side and they would come and talk to him when the song was over.

Calin is 29 and says: “I am not ashamed of honest work. I like music a lot, but if you bask in the street people say you must be crazy. I would like to find a job so I can get a place to live.

This article can be read here https://inspireyourhands.wordpress.com/2015/04/05/ambitia-iti-schimba-destinul/